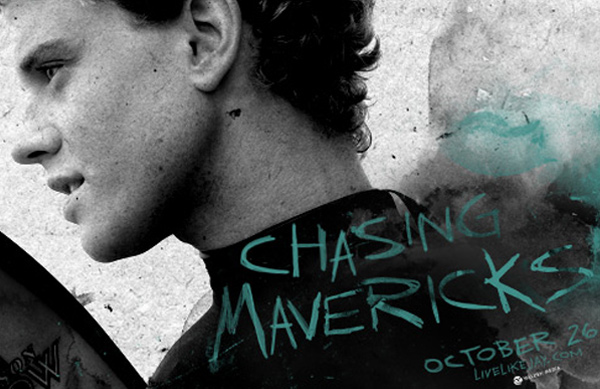 A new surfing centric movie is slated to come out later this month that tells the true story of surf legend Jay Moriarty and his quest to conquer some of the world’s largest waves.  Chasing Mavericks tells the story of a then 15 year old Jay, as he discovers the incredible Mavericks surf break, one of the biggest waves on Earth, and enlists the help of local legend Frosty Hesson (played by Gerard Butler) to train him to survive it. As Jay and Frosty embark on their quest to accomplish the impossible, they form a friendship that transforms both their lives, and their quest to tame Mavericks becomes about far more than surfing.

Judging from the trailer the film is sure to include plenty of surfing cliches and Hollywood cheesiness, however, Jay’s story is a surf legend and should provide for some great entertainment if done well.  According to the film’s website, the movie was made with the help of some of the biggest names in the surfing world, and features some of the most mind-blowing real wave footage ever captured on film.

If anything, the story should generate an interest in surfing in general and may inspire many new surfers to charge the waves.

Chasing Mavericks comes out on October 26 to a theater near you.