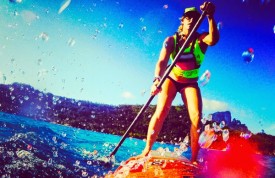 This past December, MBAC hired Ruth “Ruthy” Vesler as the Instructional Supervisor of Surfing, Paddling, and Rowing.  Ruthy brings an impressive background in watersports education and supervision into her new position. Read More 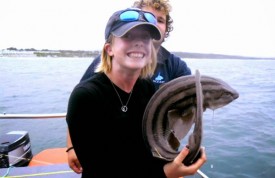 Johnny Fay is one of those surf instructors known around MBAC for his amazing longboarding skills and spiritual outlook on life. In January, as he was coming out of the water at La Jolla reef, he was approached by Gabriel Novis, a Brazilian film maker and surfer with many films under his belt. He told Johnny that he really liked his style and wanted to make a movie featuring his surfing.  Gabriel said Johnny captured his attention and that his style was different than everyone else in the waves that day. Over the next three days, Gabriel captured enough footage to put together a 6 minute surf film called Concept (A short film about feelings) displaying Johnny’s talent and lifestyle as a San Diego surfer.

Johnny was blown away by the quality of the film and was grateful for how well it was put together. He enjoys the fact that the film can relate to anyone, and not only surfers. It accomplished the goal of letting the viewer connect with Johnny’s perspective, and is not just a film full of surf footage.

Outside of being featured in Gabriel’s video, Johnny has accomplished much in the surfing world. He is currently a top-ranked Southwest division college longboarder, has a number of contest wins under his belt, and will hopefully continue to add to his surfing accolades. Within the Southwest division, Johnny is the only competitor that competes solely on a classic longboard. His opponents ride high performance boards, which are not ideal for Johnny’s preferred style of nose riding.

Johnny’s favorite part about surfing is riding the nose, a style of riding famously referred to as toes-on-the-nose or hanging ten. He describes the feeling when his toes are curled over the nose of the board and the wave hitting the back of his knees as feeling lifted, and everything connects. He enjoys the feeling of a stable weightlessness, a feeling that only happens when he’s nose riding.

We wish Johnny the best of luck with his future contests and are thrilled to see him featured in this outstanding short film. We are grateful to have his talent here at the aquatic center and hope that everyone gets to experience his talent and outlook on life and surfing. 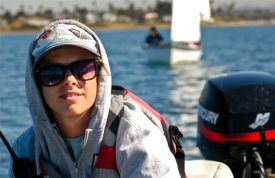 For whatever reason compels you to take a class at MBAC and learn a new sport, many people find that the skills that they learn open new doors and send them down a path they never imagined.  MBAC Sailing Instructor Laura Coleman is a prime example of a student whose curiosity about sailing led to learning as much as she could and eventually earning a spot as an instructor. Read More

Lauren Wilson will be moving down under this fall to get work experience and to surf. The recent SDSU grad and MBAC surfing instructor is looking forward to spending our winter months (the southern hemisphere’s summer) surfing the waves off the Australian coast. She has come a long way since taking her first class at MBAC where her goal was to confront her fear of the water. Read More